Enjoy a visit to the Library, take advantage of this beautiful new community center and cutting edge resources. 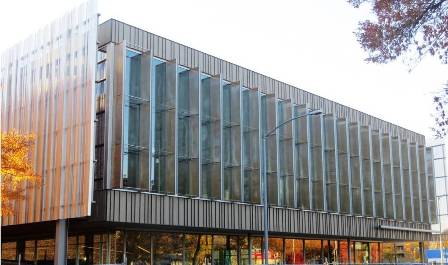 We have 200,000 volumes, popular magazines and newspapers to browse, online music and movies, and our staff who is ready to help navigate services. We are delighted to be part of a brand new era of library services in our community.

The new library features include:

Architect Will Bruder often presents information about the process of designing this exceptional building for the Billings community. A local teen, Katelyn Bauer, interviewed Will in the Fall of 2015. She filmed and edited the interview for our YouTube channel. On January 9, 2015, Will presented a talk called "Defining Place: Celebrating Context and Community" at the TedX Billings event at the library.

The groundbreaking ceremony for the new library took place on Thursday, June 28,2012.The old library building was demolished to make way for a 100-space parking garden. The parking garden opened in Summer 2015.

The Library was dedicated on February 1, 2014. On that day, over three thousand people celebrated the new addition to our community. The festivities were highlighted by musicians, civic leaders, children's choirs, historians and writers. We also welcomed the library's architectural design team who led tours of the new state-of-the art facility.


Funding for the new library was provided by a City voter-approved $16.3 million bond issue, with $3 million of those bonds to be retired by a successful capital campaign conducted by the Billings Public Library Foundation, which also secured a $2 million initial gift from an anonymous donor for the architectural and engineering services through construction.

- Beginning in early May, 14,000 cubic yards of clay were removed from the site of the new building and replaced with architectural gravel. The over excavation was completed in late June. Completed on schedule.

- All utilities were re-routed from the alley west of the current Library building and buried so as to avoid the new building site. The relocation took 6-8 weeks and was completed by mid-May. Completed on schedule


Will Bruder + Partners are the design architects for the Library project and have partnered with O2 Architects of Billings. The design team, in collaboration with students from the Community Design Center at the School of Architecture at Montana State University in Bozeman, held dozens of public meetings and focus groups involving hundreds of people during 2011 to ensure that the design was developed transparently and with extensive community input.


The Library Design Committee consisted of Billings citizens appointed by the Library Board of Trustees to advise the Board on all matters related to the planning, design, and construction of a new downtown library building.


The Library's Strategic Plan and site study reports can be found on the Additional Resources page.