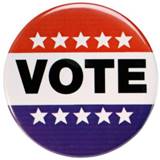 It’s Up to You -  Register to Vote!
Every November and June, Yellowstone County voters make their choices known. When you get ready to vote, make sure you know what it’s all about. The Library can help - check out these sites to make sure you are fully informed before you cast your ballot.

Register no later than 5:00pm on May 26th to vote in the June Primary election. Mail-out ballots are postage paid by the County.

If you need to register, you can do so by printing and filling out a voter registration form at home. They must be signed by hand. Return it to the Yellowstone County Election Administration by hand, mail, or email. Remember to allow mailing time for your card to arrive in time to meet the deadline.

You can check if your address is up to date and if you are registered by going to the Montana Secretary of State’s My Voter page. If you need to update your address, simply fill out a voter registration form and return it to the Yellowstone County Election Administration by May 26th.


These are the agencies that manage and regulate elections. They provide official information about the individual races and issues and let you know the responsibilities of the offices in which the candidates want to serve.


Yellowstone County Elections Offices
The Election Department administers the maintenance of the voter registration files, candidate filings and all aspects of the election process. Additionally, information is available concerning upcoming election dates, polling places and the results of current elections. Of primary emphasis and concern is making voter registration and the process of voting as simple and accessible as possible.

Montana Commissioner of Political Practices
The Montana State Commissioner of Political Practices office exists to monitor and to enforce, in a fair and impartial manner, campaign practices and campaign finance disclosure, lobbying disclosure, business interest disclosure of statewide and state district candidates, elected state officials, and state department directors, ethical standards of conduct for legislators, public officers, and state employees, and to investigate legitimate complaints that arise concerning any of the foregoing.


These organizations explain how an election is supposed to work.


Basics of Voting in Montana - League of Women Voters

Information for Voters about Candidates, Campaigns, and Campaign Finances
These organizations advertise themselves as nonpartisan and provide information about candidates from all parties. Sites are listed alphabetically.

Ballotpedia
Ballotpedia covers state ballot measures and has articles covering lots of information. It also has a sample ballot function, with links to all the initiatives and candidates on your local ballot.

FactCheck
FactCheck is an organization that provides analysis of candidate and public action committee statements and claims for accuracy. Sponsored and funded by the Annenberg Public Policy Center of the University of Pennsylvania.

Open Secrets
Open Secrets is a nonprofit focused on the influence of money on US elections.

PolitiFact
PolitiFact checks statements made by members of Congress, the White House, lobbyists, and interest groups for accuracy, and posts the results to their Truth-O-Meter.

Ideas for Additions
Want more information or have a great site to add? Tell us about it!